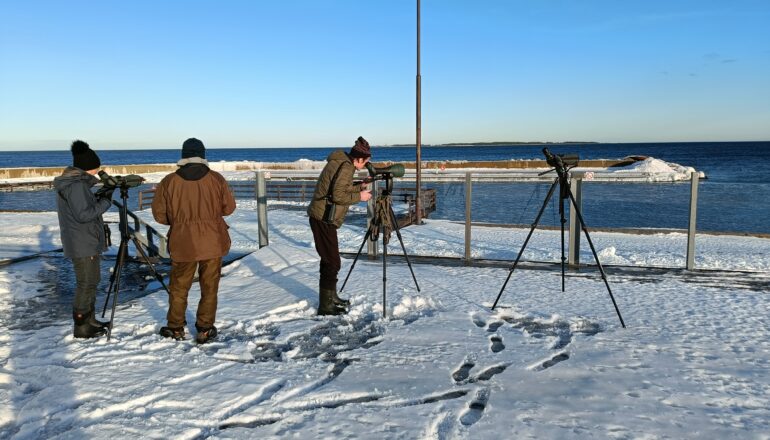 Our good friends and partners from Germany came to visit us during the second week of January. Just to have a good time, get some fresh ideas for our late winter tours and look where the lynx likes to move around. We had 4 evening and early mornings to look for animal tracks, do some birding on the coast and look for animal activity during the dark hours with thermal imaging binoculars.

This year, the winter in Estonia has been quite stable and the first cold weather arrived already at the beginning of December. With some ups and downs, the ground has almost constantly had snow covering. Andreas, Roland, and Sabine arrived a bit before 21:00 and then we drove to Lahemaa National Park. Lahemaa is a location we very often visit because there are excellent conditions for lynx and forest birds. The late arrival hour didn’t stop us from going out looking for lynx nd other mammals (or owls!) with thermal imaging scopes. The first evening brought us a sighting of an Elk and several Roe Deer. We also found fresh lynx tracks. The temperatures were around -20 C.

The next early morning excursion didn’t bring much besides some Roe Deer observations. After breakfast, we headed to the Alutaguse area, where we had our Brown Bear hides and Golden Eagle hide. We just wanted to look around, follow some animal tracks and see whatever nature offered us. The temperature had changed from -20 C to -7 C and the temperature rose during the whole day. We found several lynx tracks, lots of Elk tracks, and (only) one sleeping place. Of course, lots of Roe Deer, Pien Marten, and Red Fox tracks. Also Wild Bore tracks here and there and Hazel Grouse had left its tracks ad droppings under some spruce trees. Bullfinches and various tits were calling and the views were breathtaking. We put on snowshoes and then went off track for about 6 km through relatively difficult terrain. We reached back Lahemaa around 21 PM and decided not to go out that evening. Rather enjoyed some local beer and had conversations about birds, different locations, and politics. A good way to end a day!

The next day we went to follow a really fresh lynx track in Lahemaa national park. It was from a location, where he had seen a lynx several times. There were lots of tracks and we walked through the forest for several hours and kilometers. We heard Hazel Grouse whistle and found its’ sleeping spots, but unfortunately no freshly hunted Roe Deer or Snow Hare, which we had hoped to find. Later on, we went birding along the coast, spotted White-tailed Eagles, Long-Tailed Ducks, Goosanders, Red-throated Mergansers, Goldeneyes, and Whooper Swans. The weather had turned to +3 C and the wind was very strong. At next we went to the most northern point of Estonia’s mainland. While usually, it was a good spot for birding, this time it was full of lynx tracks. Some were overlapping, some smaller, and some bigger. Some really fresh and it seemed that in the same morning a female with a cub had passed by.

It was clear there were some lynx nearby, but the chances of seeing one, while following its tracks is close to none in Estonian conditions. They are just too clever! We parted our ways before the evening and our friends stayed in Lahemaa for another 2 nights. The results were lots of lynx tracks, a sleeping den for the lynx, and the tree cavity where a Three-Toed Woodpecker spends its nights.

It seems that the lynx situation is getting better and better in Estonia. From the end of February until the beginning of April, when the lynx has its mating season, they move more actively and become a bit more careless, so the chances of seeing them are really good. During our first lynx tour in October, our group had 2 lynx sightings. One in Lahemaa and the second one in Alutaguse.

I’m sure the spring tours will be at least as awesome as the autumn tour in 2021!