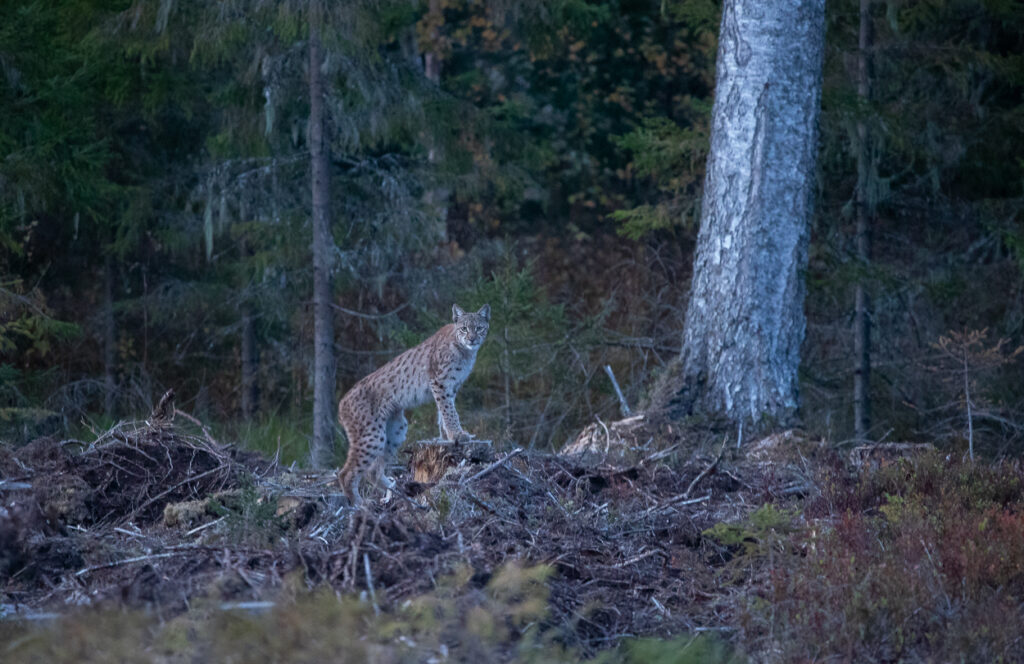 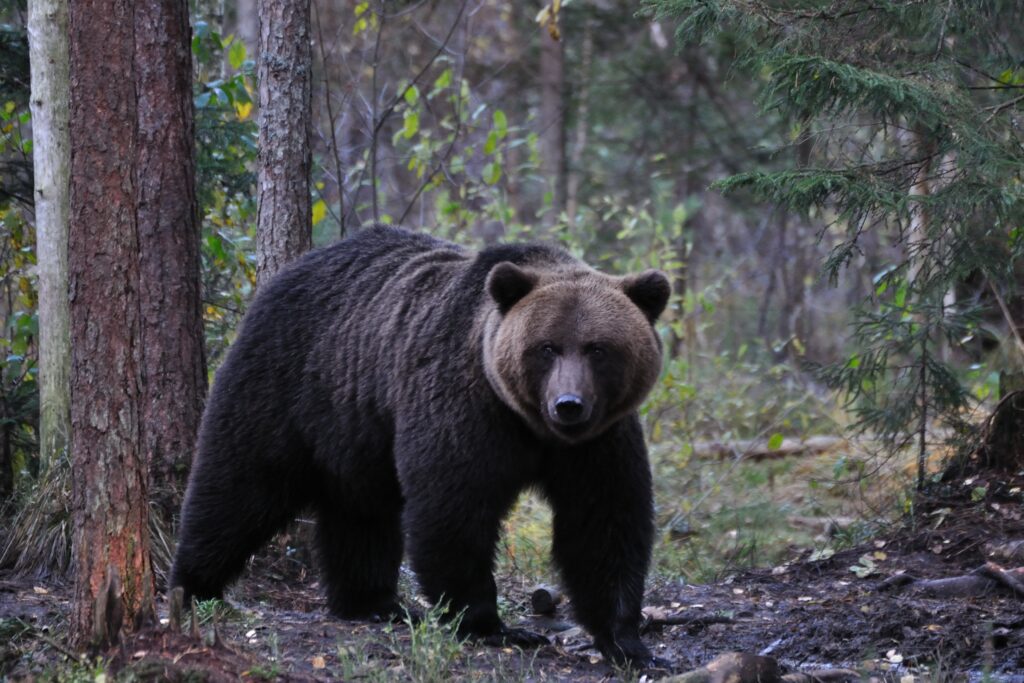 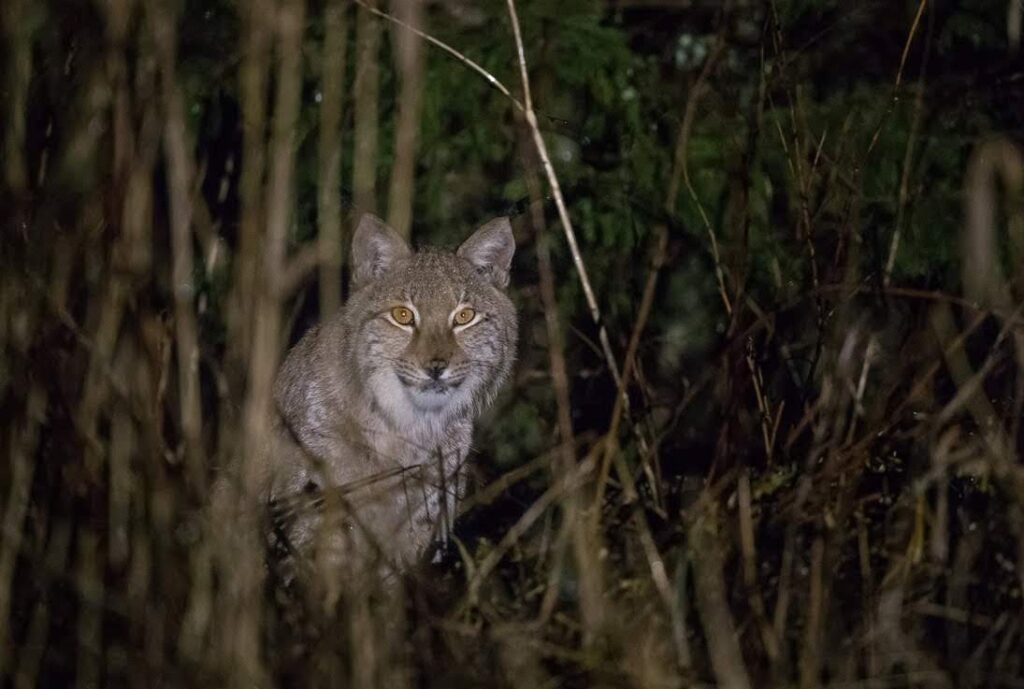 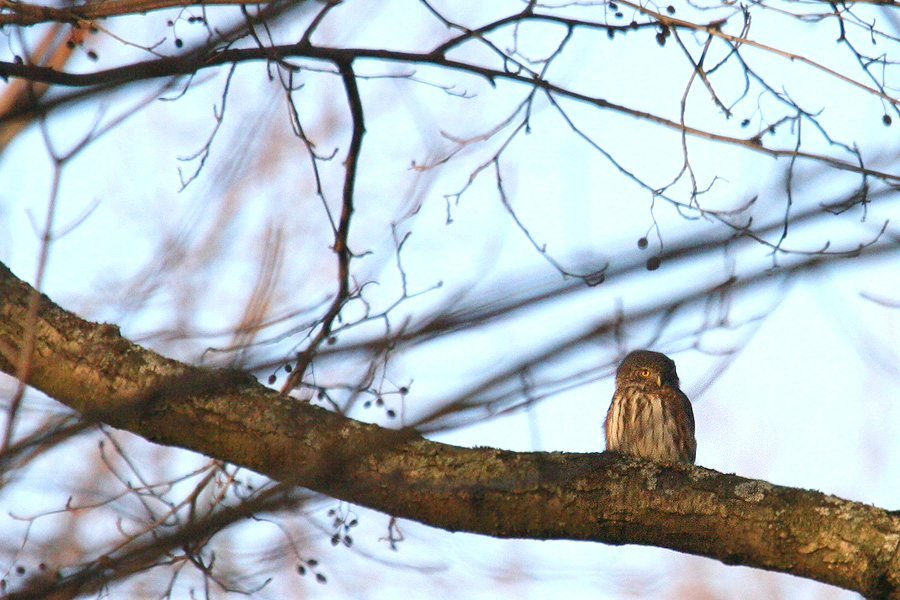 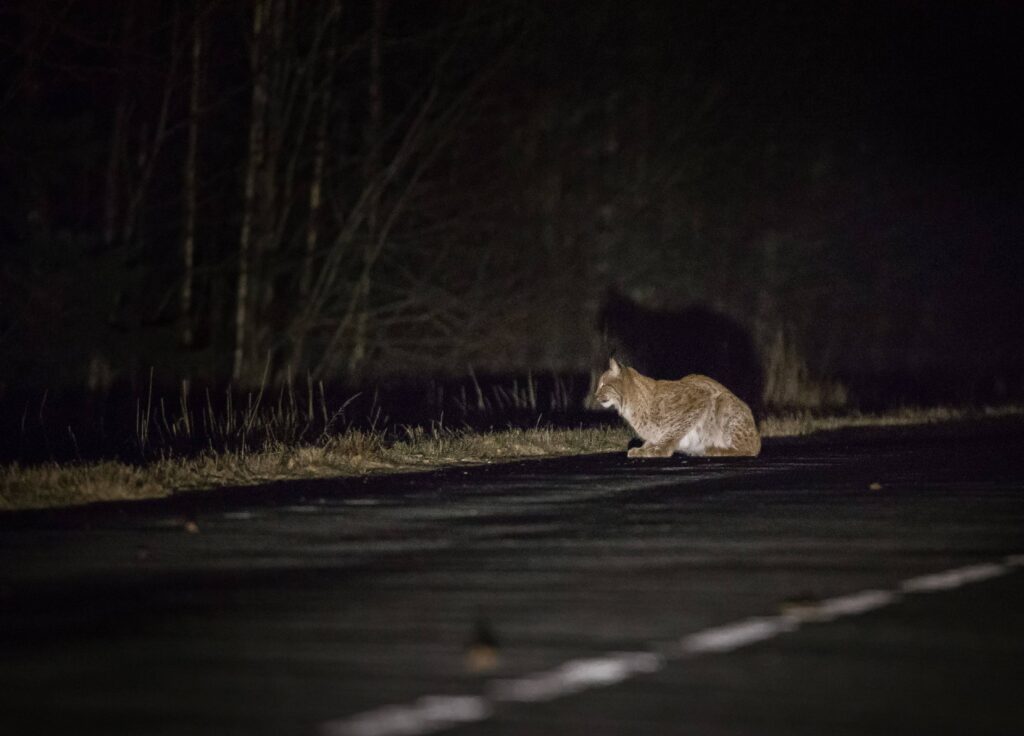 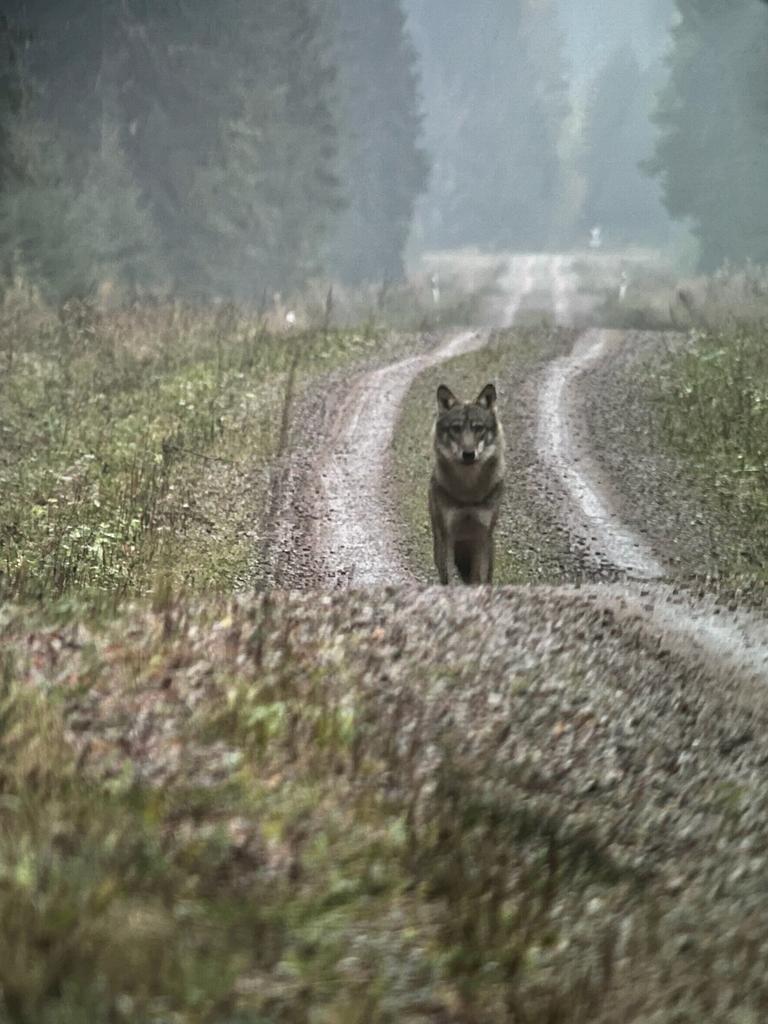 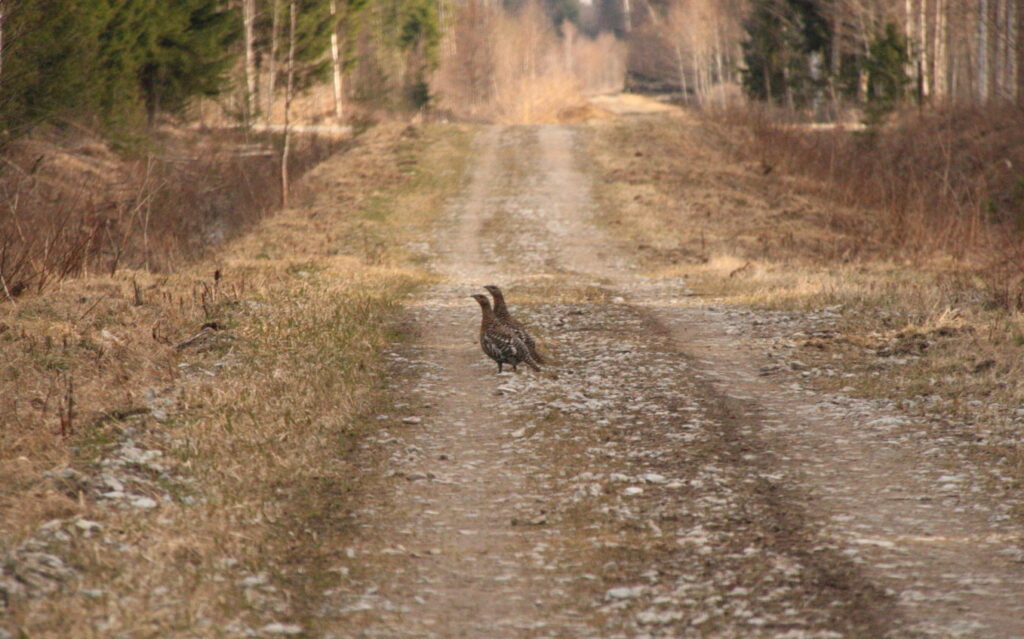 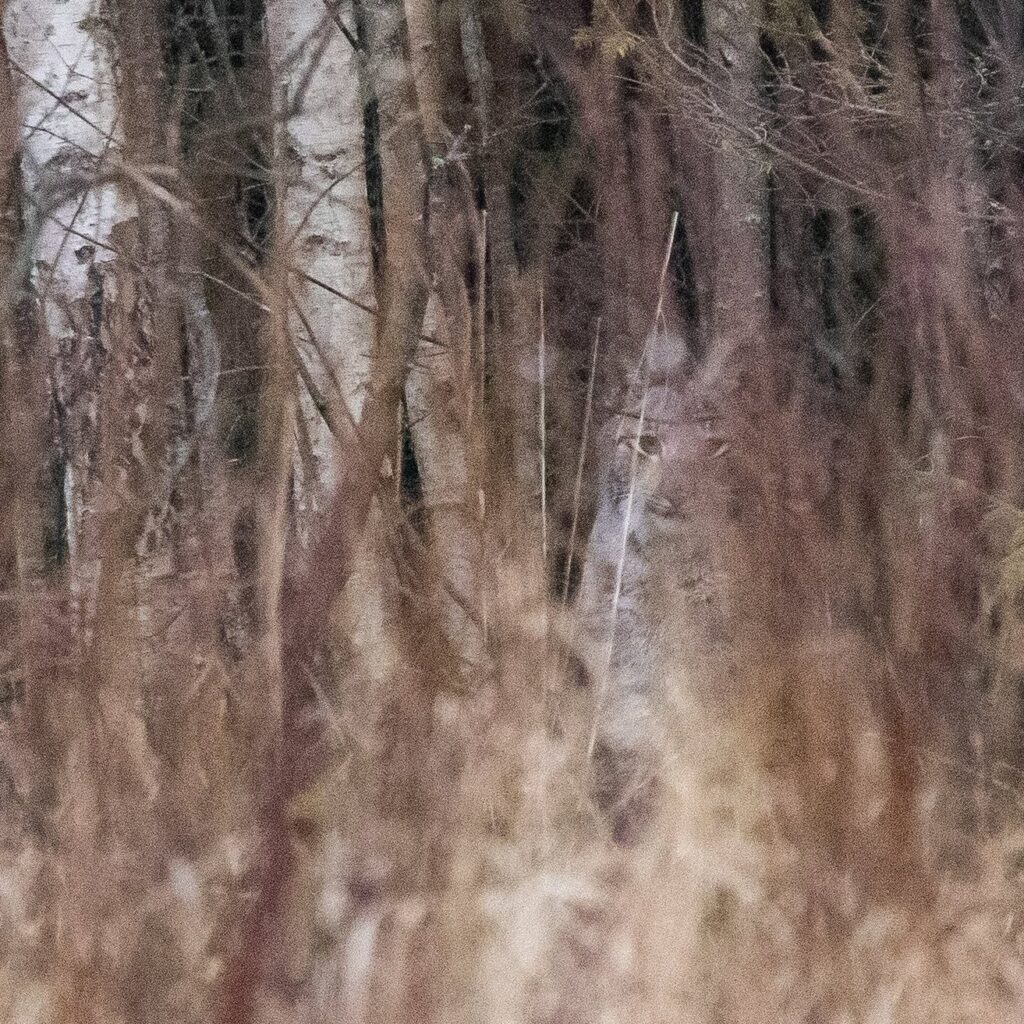 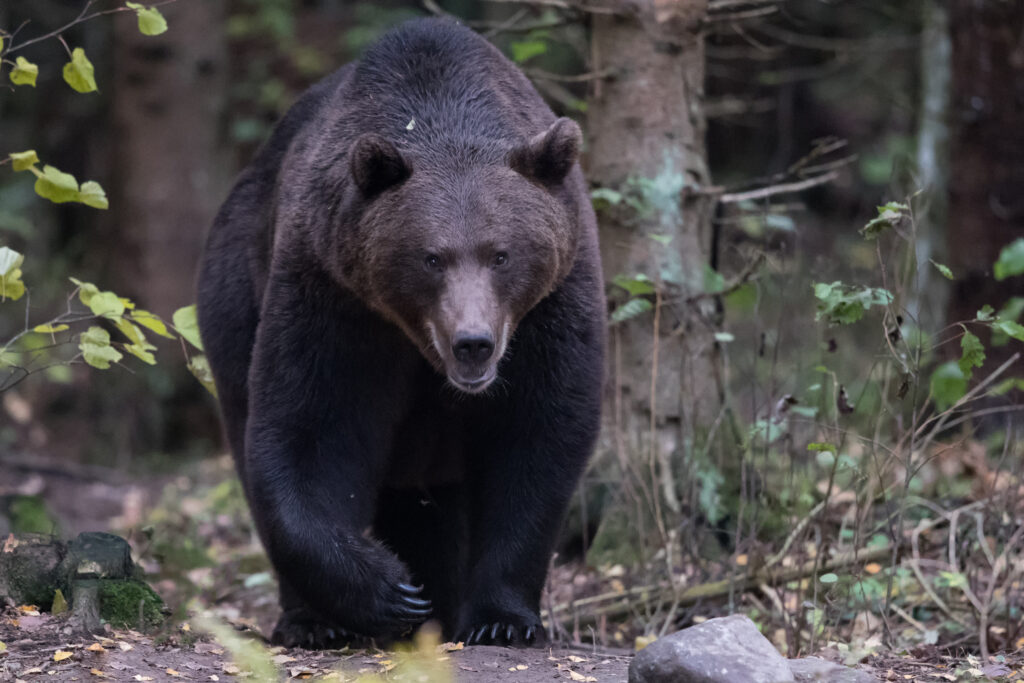 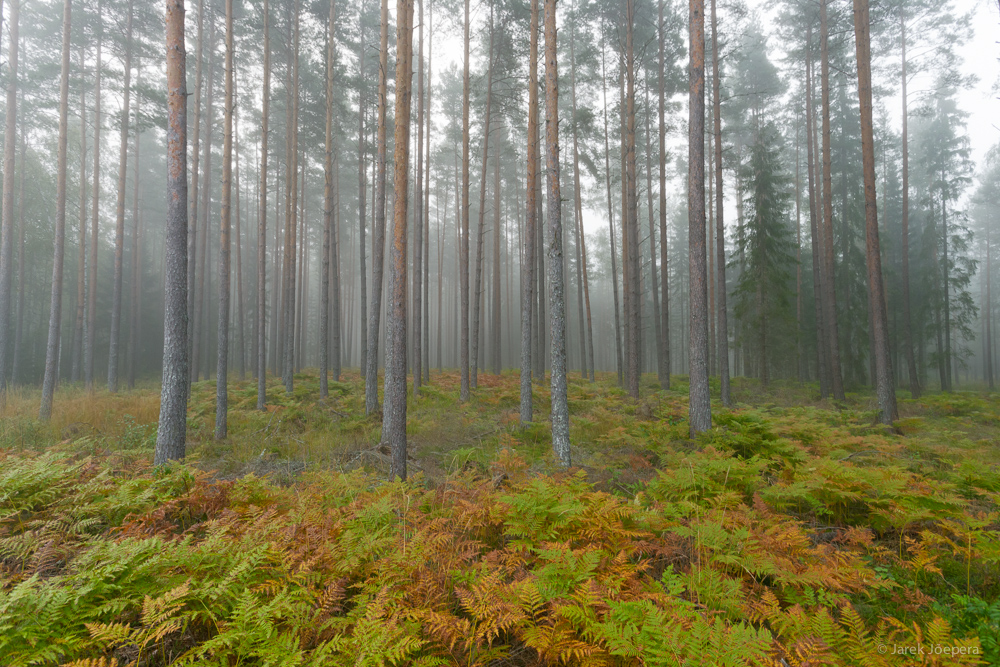 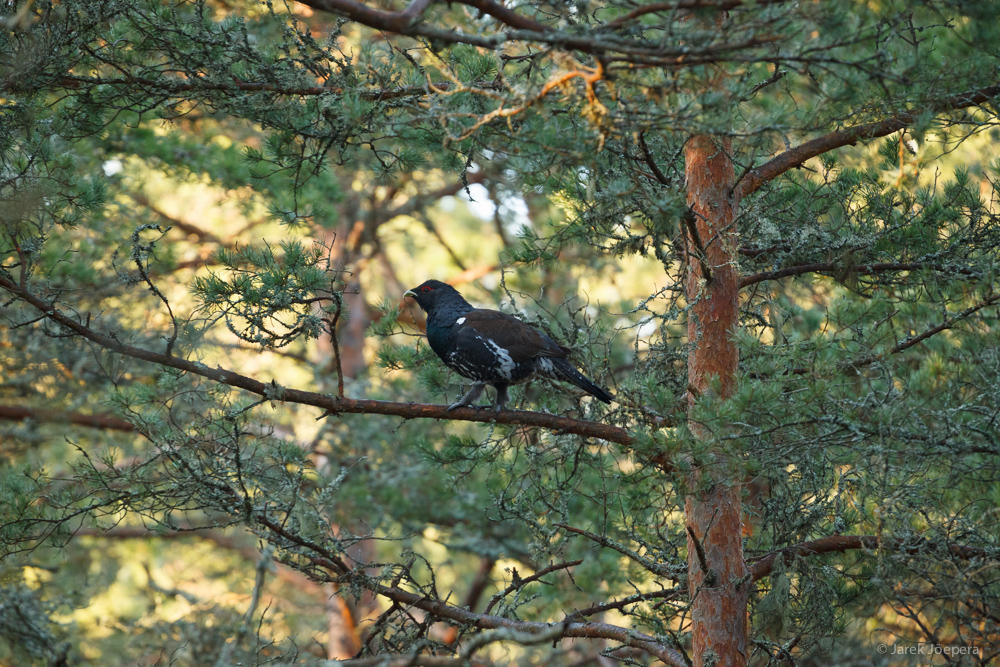 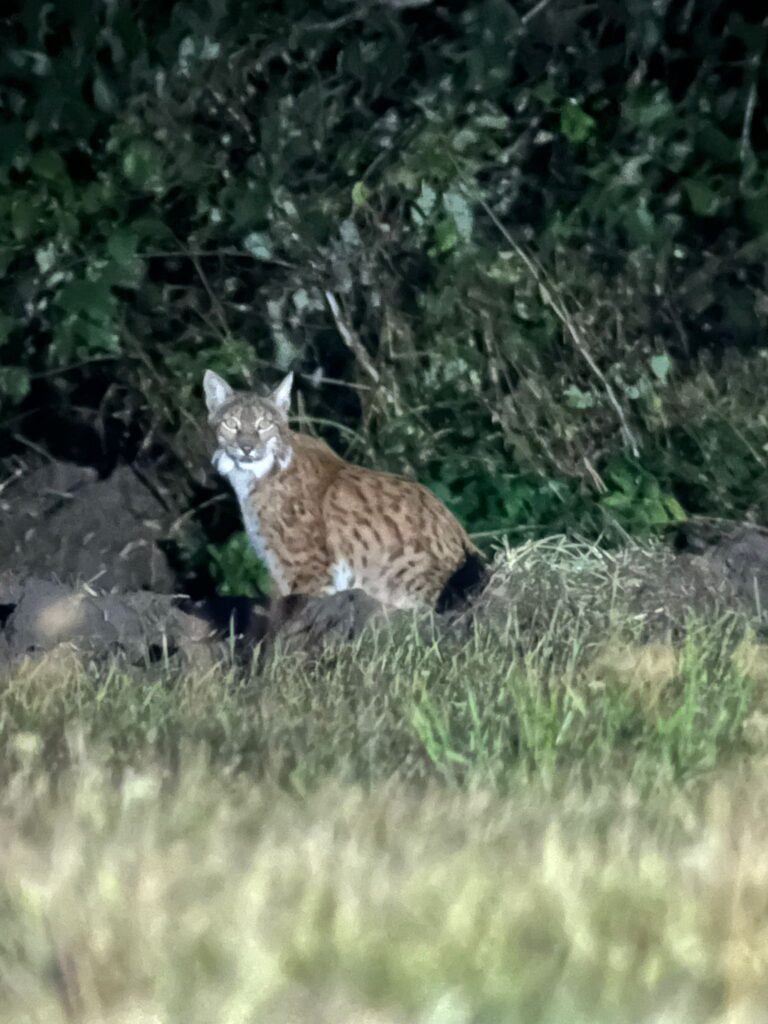 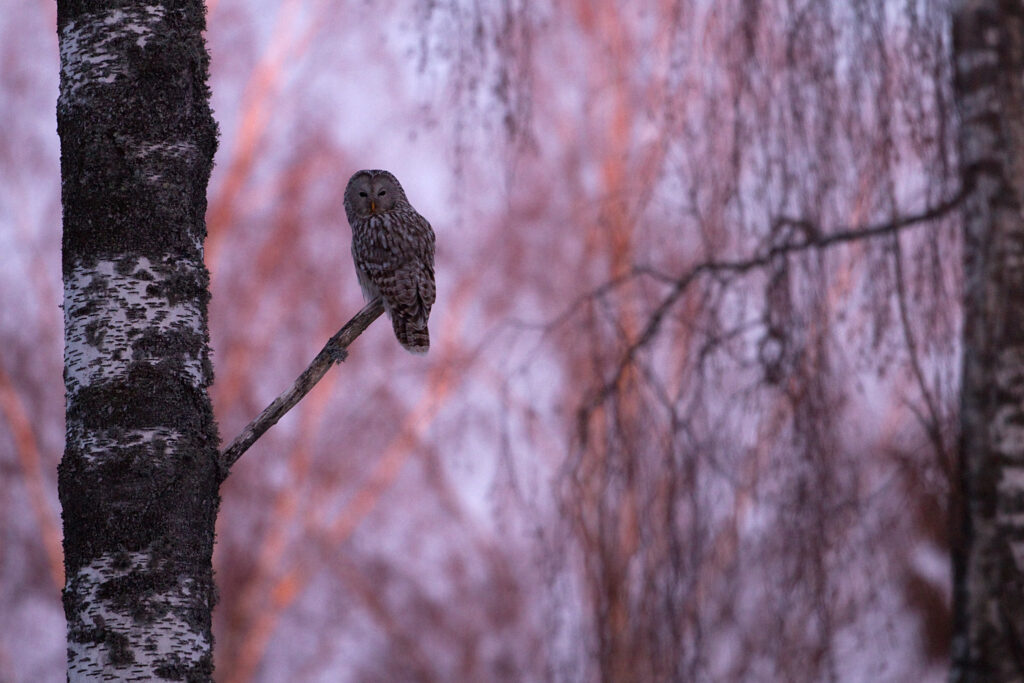 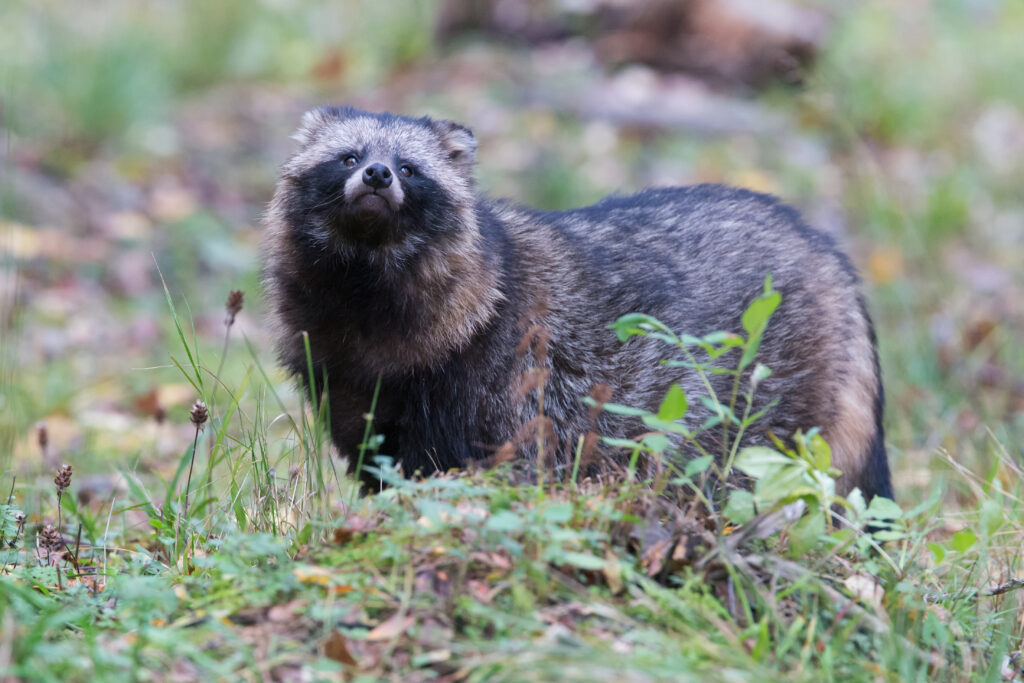 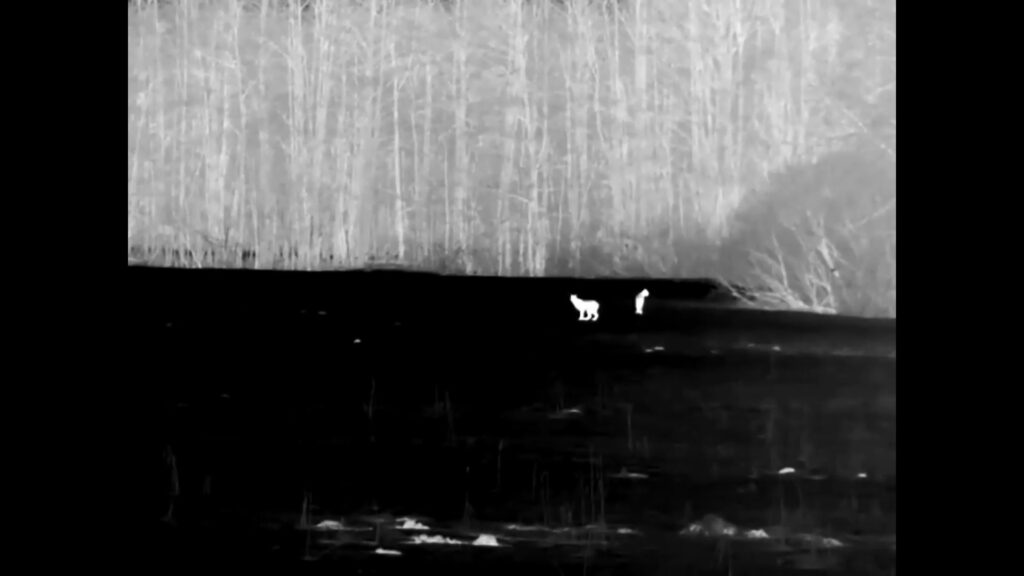 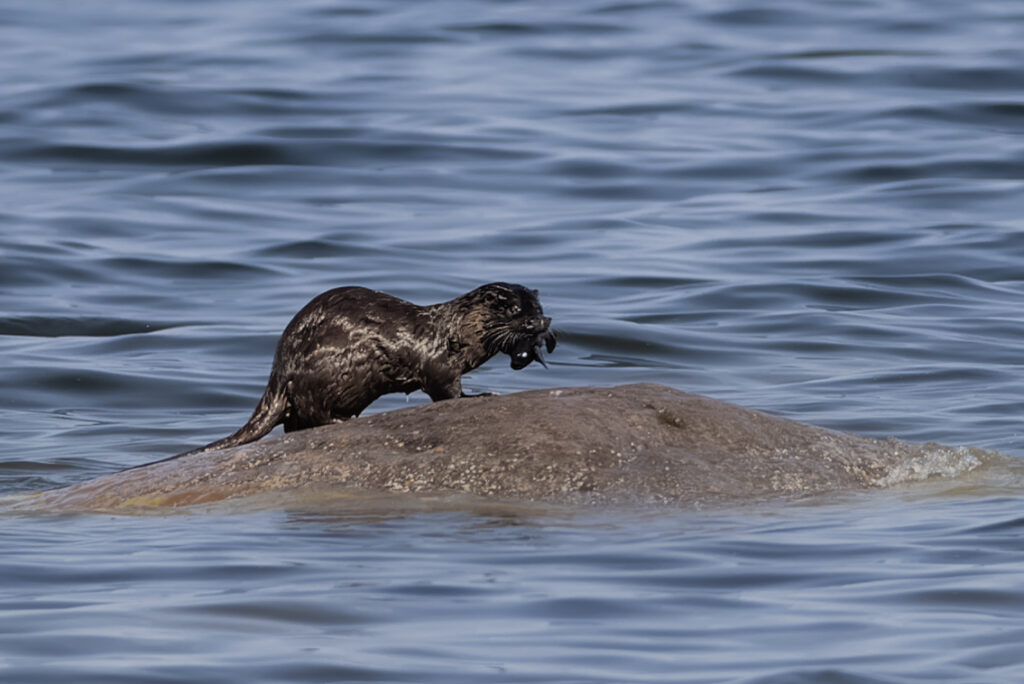 This autumn tour has 3 big target species – Eurasian Lynx, Brown Bear, and Grey Wolf. We will look for these animals in 3 different wilderness areas – West Estonia, Lahemaa National Park, and the Alutaguse area. The latter is also where we spend a night in a Brown Bear hide. In autumn, bears are trying to fatten up for the forthcoming winter hibernation and actively roam around the forests searching for food. From the hide, we’ll also hope to spot Raccoon Dogs, who similarly to bears are opportunistic omnivores and actively look for food through most of the day. For the Eurasian Lynx we look mostly during the late afternoon, evening, and night with a thermal scope, so there will be a lot of driving to cover as much ground as possible. During different periods, Estonia has been the country with the highest lynx population density and the local individuals are one of the largest in the world. Its’ main prey – Roe Deer, is doing better year after and so is the local lynx population. For the Grey Wolf, we will go to the western part of the country, where the wolf packs have been stable and present for many years now. Wolf cubs are becoming more and more independent and quiet autumn nights are the best time to hear them howl together with the pack. Due to their curiosity and confidence in the dark time, we also have chances of spotting them  During the daytime, we will rest or go on short birdwatching trips to clear our heads and enjoy the magic of autumn. Although our main targets will be the 3 big predators, we’ll have good chances of spotting Raccoon Dogs, Elk, Red Foxes, Pine Marten. October is also a great time for spotting owls (Pygmy and Ural), Capercaillie, Black Grouse, Hazel Grouse, and woodpeckers (White-Backed, Three-Toed, Black, Grey-Headed) and enjoying autumn migration.

We have also similar tours during other times of the year. During spring, you could join our Lynx and  Steller’s Eider tour, or Lynx and the Flying Squirrel tour.

The group will be picked up from Tallinn Airport and our tour starts with a drive to Lahemaa NP which is the oldest and largest national park in the whole country. Its very mosaic landscape and low population density are very suitable for the lynx and it’s known as one of the best areas to spot them. In autumn, when the tree have dropped most of their leaves and the sun sets relatively early, the lynx starts moving around again more actively and is more visible than during most other times of the year. Night in Lahemaa NP

From Lahemaa we will drive for 1 day to the Alutaguse area, where we first look for tracks and activity traces of Brown Bears. In the afternoon we’ll enter the Brown Bear hide with the high hopes of spotting one of Europe’s most impressive mammals. From the hide, we have chances of spotting also other mammals, such as Raccoon Dogs, Red Fox, Red Squirrel, Roe Deer, Wild Boar, and Elk. The hide is equipped with bunk beds, sleeping bags, pillows, and speakers that transmit the live soundscape of an autumn forest, captured by a high-end microphone next to the hide.  From the hide, there’s also the chance to hear wolves howl. Night in the Brown Bear hide.

Breakfast, Lunch, Dinner
Day 3 :
Early excursion in Alutaguse and back to Lahemaa NP

After leaving the hide, we’ll make an early drive around the forests close to the hides, with the hopes of spotting Elk, Western Capercaillie, Black Grouse, and Hazel Grouse. Afterward, we will return o Lahemaa NP and walk around to look for the Three-Toed Woodpecker and other specialties to get our head clear again for the evening lynx safari. Night in Lahemaa NP

The day will be like all the other ones. During the day we’ll rest and make again short birdwatching trips along the coast or in the forest. In the late afternoon or evening, we will start again looking for the lynx.  Night in Lahemaa NP.

Today we will still be on the lookout for the lynx. It’s our last day and evening in Lahemaa NP. Night in Lahemaa

Today we change locations and drive to the western part of Estonia. On the first possible windless evening, we will go and look for wolves. A windless evening is important as then we are hopefully able to hear them howl and thus have greater chances of spotting them later on. The area is good not only for wolves but also for lynx. So in case, the wind conditions aren’t as favorable, we will concentrate on scanning the forests and meadows for lynx, wolves, and other mammals of the area. Night in Matsalu NP

Depending on the success of the previous day, we will either look for the wolves or lynxes. The Matsalu area is also known as being one of the best locations for spotting Golden Jackals and Elk. For lynx, the area is also close to perfect with its varying land use and a big number of Roe Deers. Night in Matsalu

Unfortunately today we will depart back to Tallinn. Although, we still have some time in the morning for the last lookout.

You can arrive in Tallinn in the afternoon or even in the evening. The most active periods of this tour are evening and night hours. As Lahemaa NP is only 1h 15min away from Tallinn, we can start late.