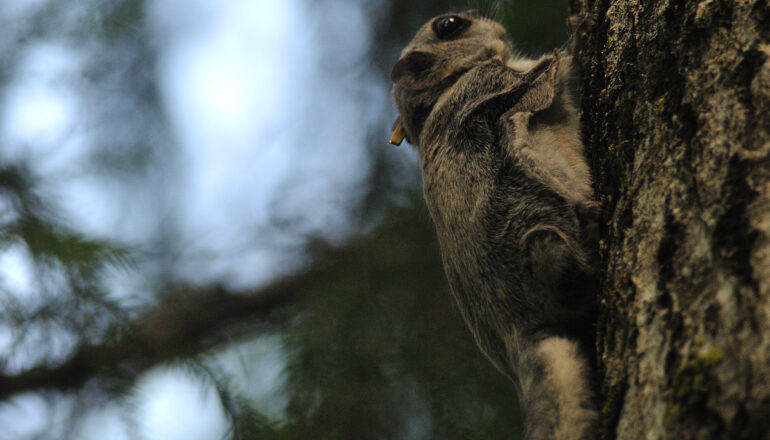 A happy ongoing year 2023 to everyone!

Every year, a new species is selected to be the animal of the year. Last year, it was the Brown Bear, an animal that we work very closely with, as we have had Brown Bear watching hides in Alutaguse region for more than 13 years. Also, many of our longer tours visit the Brown Bear hides and we have had a live camera close to the hide, showing Brown Bears, Elk, and other animals from spring to autumn. Bears are the most numerous big predators in Estonia and it can be said, that their population is doing well.

Unfortunately, that’s not the case for the animal of the year 2023 – The Siberian Flying Squirrel (Pteromys volans). The highly elusive species is also one of the flagship species of Estonian nature conservation and is under the strongest protection category with other critically endangered species. In Europe, the mammal can be found only in Finland, Estonia, and Belarus, where it was considered to be extinct since 1996, but then rediscovered in 2017. In Latvia, the Flying Squirrel was last spotted in 2001 and considered to be locally extinct since 2013.

In Estonia, it can be found only in the Alutaguse region and its surrounding forests. In 2015, it was predicted that by 2020 the Flying Squirrel could be extinct in Estonian forests. Fortunately, that was not the case as stronger protection measures started to have a positive effect on the population. The low point was 2013, when there were only 27 sites with signs of habitation known, since then the number of such sites has risen every year. In 2022, there were already 96 active sites found. That is due to the fact that the squirrels were again able to return to their former habitats and find new ones, which were formerly cut off from other areas. But now the forests have re-grown in locations where they were cut down in the 90s and the beginning of the 2000s and the squirrels are able to use these forests as moving corridors. But the Siberian Flying Squirrel population is still far from safe. Hopefully, things will get better and they will repopulate also other areas of Estonia at one point.

During some of our mammal tours, we also meet Estonia’s most experienced Flying Squirrel expert and get the chance to learn about the small mammal and the hardships of species conservation. We also visit some sites, where the expert has trail cameras and with luck on our side, we have the chance to spot one of them. The reality is that the situation changes constantly, during some years, the squirrel uses one breeding cavity, and during some years, another. There’s also the chance that the squirrel was present for every day for weeks but then disappears for the rest of the season. Maybe it was eaten by a Ural Owl or felt threatened by a Pine Marten, who was checking cavities? Last year we had some great observations (Read more from here and here) and the Flying Squirrel was every time we went on the tour. I hope this will also be the case for 2023 – the year of the Siberian Flying Squirrel.