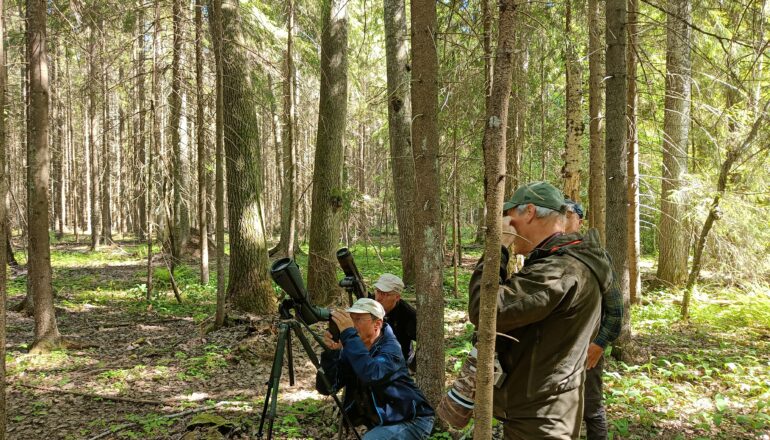 It has been quite a ride.

Our last tour ended on the 3rd of July when our guide got back from a 2-day Brown Bear and Flying Squirrel tour with a great group of Sussex Wildlife Trust worker and friends. It was a delayed stag “party” and the groom wished to see Brown Bears before getting married. Of course, they got married before, just due to Covid-19, they had to postpone the trip for 2 years. A genius idea for a stag “party” and an excellent trip with a great group!

We not only saw 3 different Brown Bears, Raccoon Dogs, and a Flying Squirrel but also managed to get great views of a female Capercaillie with 3 chicks on our way to a refreshing swim. During our stay in the bear hide, the temperatures rose above 30 degrees, so on the next day, after a cup of coffee, the swim in a bog lake was the one thing still missing. Just after jumping into the water, we spotted 2 large birds of prey and +1 smaller one. They were 2 Golden Eagles with a raven that was mobbing them!! Not bad at all!

The day culminated with views of a Flying Squirrel during the day.

Another fresh memory is from a 2-week tour with 4 Swizz birders (26.05-9.06.2022). It’s even hard to point out what we/they saw. In total, we heard and saw over 225 different bird species! And getting so many different was not the main idea of this tour…The main wish was to see and hear smaller warblers, which most of them had seen only during migration + owls, grouse, and woodpeckers. And we pretty much got them all – Greenish Warbler, Barred Warbler, River Warbler, Red-Breasted Flycatcher, Ortolan Bunting, and so on…only the Booted Warbler did not show itself. By the time we visited the region where it is usually seen and heard, there had been only 1 observation for the year. It seems that the cold spring had had its effect on their arrival time and numbers.

Although it was not the best time for woodpeckers, owls, or grouse, we still managed to see and hear most of them – 3 male Capercaillies (feeding on aspen trees in the evening), Black Grouse, Hazel Grouse, Ural Owl, Tengmalm’s Owl, Three-toed, White-Backed, Grey-Headed Woodpecker, Middle-Spotted, Lesser-Spotted, and Black Woodpecker. One of the most mesmerising observations was the Hazel Grouse, who played hide and seek for a long time, but then showed itself very well and it made a sound totally new to all of us. We believe it was for communicating with the chicks who were close by in the area.

Another incredible experience was seeing lekking Great Snipe, who we managed to spot with a thermal scope and then observe them through our spotting scopes jumping out of the tall grass. Too far to photograph, but everyone who knows how difficult it can be can appreciate such observations.

And then, on one of the last days, we had possibily one of the greatest Flying Squirrel observations anyone has ever had in Estonia. We managed to observe one (female) coming out of the tree cavity and climb high in the tree canopy and then observe it feeding for about 2,5 hours through 2 spotting scopes!! In addition, it glided at least 2-3 times. Once it glided and changed its flight direction in mid-air! This spectacle + the long observation was also new to the Flying Squirrel specialist, who had studied them for over 30 years! Put into perspective, it took him 6 years after starting to study this mammal, before he got his first views in the wild. Crazy! All this during midday.

Another group with our German partners from Birdingtours had 2 lynx observations, Brown Bears and Raccoon Dogs from the hide, 1 bear observation while birding in Lahemaa NP, Flying Squirrel, Ringed Seals, all kinds of orchids, Ural and Pygmy Owl, White-backed Woodpecker, Greater, and Lesser-Spotted Eagle and may other highlights. This tour started in mid-June! Certainly a tough time for some of the species, but when you look hard enough, you’ll find it…or you’ll find something even better and less expected.

As there have been so many excellent tours this spring, I’ll try to reminisce about our April and May tours in our next blog post.