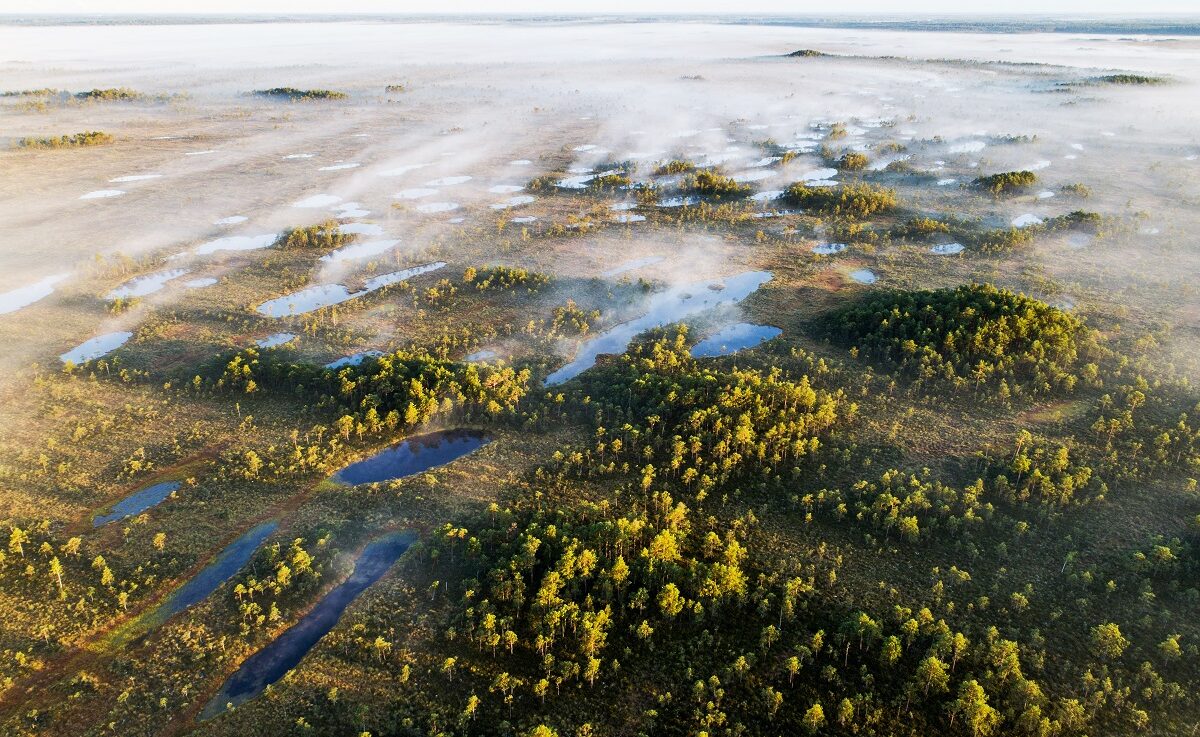 NaTourEst is an Estonian nature travel company, whose capital is well-preserved nature. Thus, we find it important to contribute to the well-being of Estonian nature. The need for natural resources in Estonia is rising, just like anywhere else in the world. This leads to the loss of biodiversity and climate change, which are some of the problems we want to tackle with our current and future projects. That’s why we work with nature conservation organizations and help them find solutions and alternatives to intensive use of natural resources. One of the ways is to show, that employment can be increased without damaging the ecosystem, e.g. not logging or extracting peat. Below you can read about our current and future projects.

We are taking part in the process of developing the Estonian Forestry Development Plan until 2030. Representing the economic interests, which are not based on logging/forest destruction, but rather on biodiversity and the good health of the ecosystem in general. We share the same views with the Estonian Nature Tourism Association, which also stands on our side in the public debate.

For many years, NaTourEst has been financially contributing to the Estonian Fund of Nature’s (WWF’s partner in Estonia) yearly Young Nature Conservationist Award among others.

In autumn 2017, the NaTourEst team helped to initiate the process of inventorying and protecting Woodland Key Habitats (WKH). Our contribution was finding the means to finance the project and organising meetings between the sponsors and local interest groups. The project started in August 2018 and during the first months, experts had already found more than 300 hectares of WKHs. During the times, when forest management is intensifying, these patches are vital for old-growth forest species. The objective of the project is to find at least 2000 hectares of WKHs in commercial and limited conservation zones in state forests.  You can read more about it from our blog post.

Besides being one of the founding members, Natourest was also the initiator of establishing the Estonian Nature Tourism Association (ENTA). The aim of the association is nature conservation and creating economic added value through biodiversity.

Besides influencing social processes, we are first and foremost people who like the hands-on approach and we have 2 long-term projects, which at least for us are great and important:

In 2017. we bought 86,2 hectares of land (our of which 72,7 ha is forest) in the region of Alutaguse. It’s one of the least populated areas of Estonia with vast taiga forests and bogs. Although the piece of land we bought is not big, it interacts with existing nature reserves (Sirtsi Nature Reserve and the newly founded Alutaguse National Park), giving it a higher value. The former farmland is mainly covered with middle-aged taiga forest, but there are also patches of grassland. On our land, there is a Brown Bear and Wildlife Watching hide for observing Brown Bears and other forest species. Through building and managing the hide, we provide work for locals.

The hide and activities related to it affect around 2 hectares of the total area, elsewhere we let nature run its course without interfering. This means also that no hunting is allowed on our land.

In addition to serving as a private conservation area, helping local bio-diversity, “Alutaguse Bear Forest Project”  is working effectively as a carbon sink. It’s capable of offsetting all the CO2 emissions caused by the flights of our tour clients and even more, balancing our effect on the climate. You can read more about the project and our forests’ capability of biding carbon dioxide from the atmosphere from here.

But we have a clear plan on investing in future projects and will not confine with just the land we have right now. The natural resources of Alutaguse need protection and the biggest problems are here connected with the forests. Thus, we plan to increase the size of protected forest land with our own resources and have created an opportunity for everyone who wished to contribute to this project. Namely, we have established the “Alutaguse Bear Forest Fund” and you can read more about it from here.

MAINTAINING SEMI-NATURAL COMMUNITIES ON THE ISLET OF KÕRGELAID

Unlike protecting taiga forests in the region of Alutaguse, our second conservation project concentrates on a completely different habitat, but certainly not less important and even more endangered. Namely, for over 10 years, Natourest has rented from the state a 15 hectares wide islet of Kõrgelaid, which belongs to the Hiiumaa Islet Nature Reserve. The islets are part of the so-called Pearl of Väinameri, which is a chain of protected islets between the Hiiumaa and Muhu – Estonia’s second and third biggest islands. When in Alutaguse the best way to protect forests and marshland habitat is simply by not interfering with “nature’s ways”, then Kõrgelaid, on the contrary, needs managing in a nature-friendly way.

The reasons for this go back hundreds, if not thousands of years.  Namely, due to continuous mowing and grazing, semi-natural communities, such as wooded meadows on Kõrgelaid, have formed over the centuries and have become very rich in species. Shortly said, a wooded meadow is a sparse natural forest stand with a regularly mowed herb layer. The combination of the calcareous soil of West Estonia, extensive management and varying growing conditions, create a unique plant community incredibly abundant in species. For example,

Laelatu wooded meadow holds two small-scale world records in species richness –  25 different vascular plant species were found growing in an area of 10×10 cm and 42 species in an area of 20×20 cm. In addition, various insects, fungi, lichens, birds and mammals, many of which prefer or even depend on wooded meadows. Unfortunately, the shift in Estonian agriculture started to change during Soviet times and has changed even more in recent decades, as elsewhere in Europe – grasslands are managed very heavily or not at all. Extensive nature-friendly management is not suitable for heavy machinery and thus not cost-effective. As a result, the area of semi-natural communities has been declining rapidly.

It is relatively easy to manage wooded meadows on the continent and on larger islands because it is accessible for larger machinery and the state and the EU subsidies cover the additional costs. However, on smaller islands and islets, extensive management is much more difficult. Everything has to be transported by small boats because the waters are shallow and there are no actual ports, the landscapes are rocky and uneven and there is no electricity or maintenance facilities for the equipment. That’s why all the work has to be done manually.

Our mission is to maintain the wooded meadow of Kõrgelaid and to manage the juniper-stands. The islet had continuously been grazed and long ago even inhabited by humans. Only until recently, the grazing stopped and the grasslands began to overgrow with juniper and buckthorn. Thanks to our 10-year work, the latest botanical inventory once again showed an increase in species richness. Although the semi-natural grassland on Kõrgelaid is only 1 hectare wide, it is still quite remarkable for a small islet so far from the mainland. As an added value, we can enjoy the alternating landscapes of the islet during our nature tours, which often take us to wonderful places such as Kõrgelaid.

In a year, we have about 25 guided group tours during which we act as environmentally responsible as possible. We use reusable cups, everyone who does not have a reusable water bottle with them will receive a 0.5-liter bottle, which they can fill up from larger tanks that we have with us during all tours. We do not use plastic cutlery and also ask our partners to pack picnic meals into reusable containers and as plastic-free as possible.

Fortunately, there is currently also a “green-turn” in Estonia, so more and more people have become aware of their impact on the environment. These things do not seem to have a greater effect at first, but after a week-long tour, it does feel much more gratifying when you see how little waste you have produced. This is an on-going process and we are continually trying to make the right decisions to reduce our environmental footprint.

Our tours take us mostly to rural areas, where tourism is often the best way to create jobs and thus provide local communities with sustainable economic opportunities. We believe that the best way to protect nature and the environment in general, is to make sure that people wouldn’t lose their direct connection to the wonderful surrounding they live in. Also, it often takes the word of a stranger to make people realize what they have. All in all, our beliefs can be described by the general definition of ecotourism, which is “responsible travel to natural areas that conserves the environment, sustains the well-being of the local people, and involves interpretation and education” (The International Ecotourism Society, 2015).

Through our “Alutaguse Bear Forest Project”, we are also offsetting the CO2 produced by the flights of our tour clients.

Nowadays there’s a lot of information out there that explains how traveling by flight affects the environment negatively. It’s reported that the global aviation industry produces around 2% of all human-induced CO2 emissions and it’s responsible for 12% of CO2 emissions from all transport sources (compared to 74% from road transport). Unfortunately, Estonia is located on the edge of Europe and it’s really time-consuming to get here without flying. At the moment, there are active efforts to establish better land and water transport connections between Estonia and Central Europe, but it will take time. Currently, there is an active debate in Estonian society about how intensively should our forests be managed, how much gravel, sand, shale, and other resources should be dug up, how many wild animals hunted, and much land should be covered with various infrastructure.  In these discussions, we stand in favor of extending the land under nature reserves, using the justification that sustainable nature tourism can provide a longer and more sustainable employment than excavating, clear-cutting and hunting. Now if we consider all air travel to be 100% bad, it may well be that, because of the loss of tourism revenue, intensive and unsustainable industries will have stronger arguments to continue with ecologically destructive economic activities. Thus, peripheral areas, where most tourists arrive by flight, may be at greater risk.

Nonetheless, we feel responsible and thus have already made efforts to compensate for the flight emissions of our clients and will continue to do so. Here again, comes to play our “Alutaguse Bear Forest Project” and the carbon sequestration aspect of it. The forestry industry claims that active forest management is the best way to capture carbon, but recent research has shown otherwise. Dead trees decompose slowly, and the carbon they previously stored will mostly get trapped in the soil, and not released in the air. If the forest area will not be clear-cut, the surface soil not turned upside-down, and the water regime unchanged, the carbon will be stored in the forest soil. We do not cut trees in our forest, and all the carbon sequestered by the trees is stored for a very long time. We also made some generalising calculations, which shows that much carbon gets emitted by the flights of our clients and how much carbon our forest patch can store ina year. You can find the calculations here.