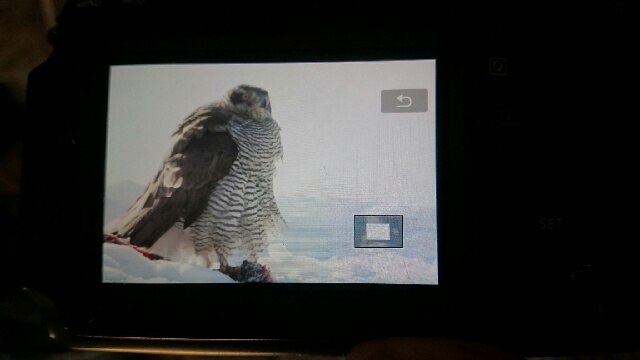 The thermometer has shown degrees below zero now for more than a month. One night the thermometer on one of our tracking cameras even showed -31°C.  This means that all the fallen snow has stacked up, giving forests and their surroundings that winter wonderland/picture book look. Now, if you are a wildlife photographer, adding a Goshawk to the picture would make the sight even better. And now imagine adding a Golden Eagle or two Golden Eagles to the picture (minus the Goshawk of course). That would surely be something else.

If you would like to see this picture or take a photo yourself it is possible in our Brown bear and wildlife watching hide. So in winter time, the Brown bear hide has transformed itself into a Golden Eagle photography hide. The first time we saw the Golden Eagle near our hide was in December before there was any snow. Now it has become a daily visitor and sometimes there are two Golden Eagles at the same time. The Goshawk is a much newer visitor, but it seems that it has started to like the place, and it has shown itself every day since the first visit.

This week we also had two brave photographers who sat in the Golden Eagle photography hide – Phil Gould and Mati Kose. Brave in the sense that they did it during the coldest day of the year. The gas heater helped to keep the inside temperatures tolerable, while the outside temperature was around -30°C. The wait paid off, as both the two Golden Eagles and the Goshawk showed up. The latter even sat in the sun and posed for about 3 hours. 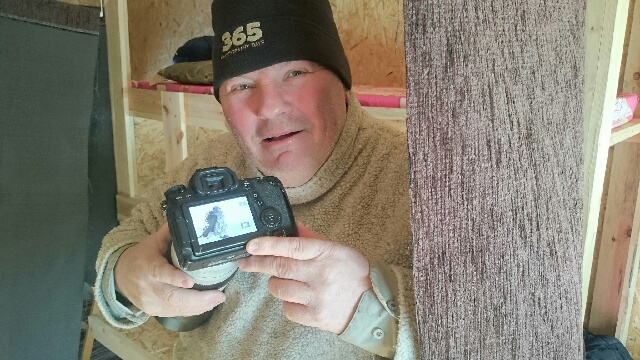 We are equally happy that the Grey-headed Woodpeckers have stayed around and we have also several new smaller guests who did not show themselves until recently. Beautiful Eurasian Bullfinches started to come for the sunflower seeds and Common Redpolls like the linseeds. It is even possible that there are some Arctic Redpolls in the group. Also, Eurasian Treecreepers were seen feeding together with a group of tits. The other daily guests have stayed the same: Great-spotted Woodpecker, Willow Tit, Marsh Tit, Crested Tit, Nuthatch, Coal Tit and Common Jay.

Cold temperatures and thick snow have forced the Raccoon Dogs to hibernate and we haven’t seen them on our trail cameras for some weeks already. A pretty looking Red Fox shows itself from time to time, sometimes during the daytime, sometimes in the night. The breeding season of the Eurasian Lynx is in full gear and their footprints have been seen several times near the hide. Hopefully, one of them will find their way to the hide.