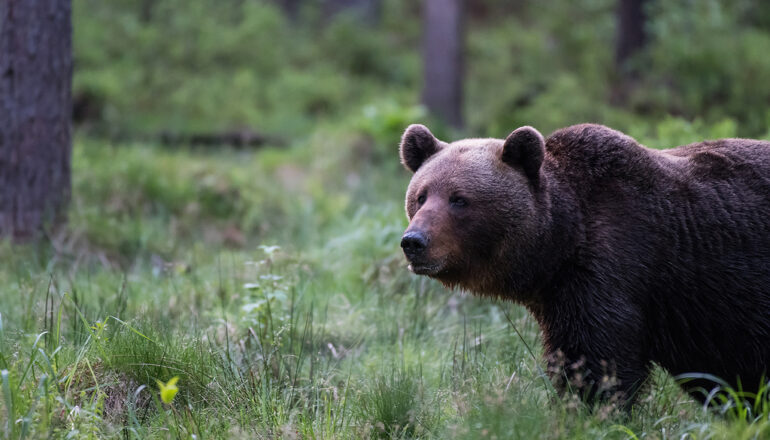 We are happy to announce that Estonia has now one more national park – Alutaguse. The idea of establishing Alutaguse National Park was already considered at the beginning of 1920s, it took almost 100 years before it was finally carried out. The aim of the national park is to protect the mires, forests and coastal landscapes, as well as the traditional culture of Northeastern Estonia.

For us, it’s exciting news, as we have always hoped that people would start to appreciate Alutaguse area more and more. Natourest established itself in the region about 10 years ago, when we started building our first Brown Bear hide. Due to its success, we have stayed there and hope that the new national park would help us to promote the area and NE Estonia in general.

Alutaguse is not only the best place for seeing the Brown Bears but also one of the last standpoints in Estonia for the Willow Grouse. According to Hanno Zingel (adviser for the Ministry of the Environment), about 90% of Estonia’s some 50 remaining grouse nests will stay under the new NP.

One success story of Alutaguse is the Golden Eagle, who is known to have bred in the area already in the 1930’s. In 1938, the first wetland reserve was established for the protection of this magnificent bird. Having survived the low point in th 1930’s (with only about 10 breeding pairs), the Golden Eagle is now diffusely spread all over the country with around 60-70 breeding pairs.

One other species strongly connected to the Alutaguse region is the Siberian Flying Squirrel. For this nocturnal species, the mixed forests with aspen and spruce trees in the area are THE last standpoint in Estonia. The future will tell if the Flying Squirrel will follow the footsteps of the Golden Eagle.

In the borders of the newly formed NP lies also Estonia’s longest sand beach, the area with the country’s highest concentration of lakes (Kurtna), Puhatu wetland together with the exemplary primaeval forest of Poruni, Smolnitsa sand dunes by Lake Peipus and Estonia’s only continental sand dunes at Struuga. But these are just some of the highlights.

All the land (43 568 hectares) under the new national park was actually already under protection before the park itself was established. But joining the smaller reserves together under the name of Alutaguse National Park will certainly help to promote the area and thus, make it much more attractive for investments and environmental protection projects.

Our Brown Bear and wildlife watching hides are not situated inside the newly formed NP, but just next to it. Now we can say we are located just between 2 national parks – Lahemaa NP, which is the oldest NP in Estonia (formed in 1971) and Alutaguse NP, which is the youngest. As the ground under our hides belongs to us (NaTourEst), we are also playing a role in local nature conservation. First of all, we do it by bringing more people into the region, who then consume local goods and services, so the local people who are familiar with the nature around them would stay there to help to protect it. Secondly, the 100 hectares of land that we own around the Brown Bear hides will be managed only by nature itself. So that all the wildlife that calls the place a home, does not have to worry about being disturbed or losing their home to clear-cutting. But that’s another (and much longer) story that we will discuss in the future.