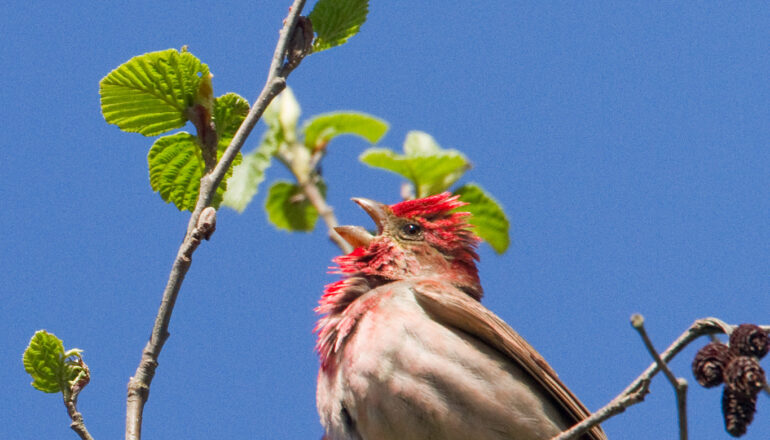 That’s probably the most frequently asked question among people who want to come to Estonia for either birdwatching or mammal watching. The shortest and most honest answer has always been – it depends on what you want to see or experience. In this post, we’ll try to give an overview of when can you see what?

January and February are usually the coldest months of the year, but even then it’s possible to look around for both mammals and birds. It’s a great time to spot some winter visitors, such as Hawk Owl, Waxwings, Rough-Legged Bussard, Snow Bunting, and Redpoll. As the forests are quiet, woodpeckers pecking on tree trunks are relatively easy to find. For the Ural and Pygmy Owl, there are probably better times, but when you know their regular hunting grounds, it’s certainly not impossible. In February, it’s rather normal that the Black Grouse are visiting their lekking grounds and Hazel Grouse are calling in the forest and Grey Partridges are relatively easy to find in snowy areas. Everything depends still on the temperatures and it’s not uncommon that the temperatures fall under -20c degrees. The colder the weather, the less activity there usually is. Along the seaside (if it’s not frozen), you can expect Long-Tailed ducks, Black and Velvet Scoters, Common and Red-Breasted Merganser, Goldeneyes, and various gulls. Snow Buntings can also be spotted.

The first two months of the year are reasonably good also for mammals. Elk have gathered into small groups and it’s easier to spot them through leafless deciduous trees than during most months. The end of February is also relatively good for Lynx spotting, although in March the weather conditions are better and more stable.

January and February are also the winter months when the Steller’s Eiders are wintering in Estonian waters. When planning a winter tour, the most important thing to remember is that the length of the day is short:

March has more sunlinght than the previous months and depending on the temperatures, the first Northern Lapwings, Skylarks, Cranes, and Greylag Geese are usually spotted during the month. There might definetely be also other arrivals, but the aforementioned species are usually the first ones to arrive. In March, the chances to spot Western Capercaillie, Hazel Grouse and Black Grouse are also higher than previously. The same goes for owls and woodpeckers, who now hoot and call more often and drumming can be heard on sunny days. Mostly there are also some Northern Hawk Owls who stay also for March.

March together with October is also the best month for spotting the Eurasian Lynx as it’s the highpoint of the mating season for them. Usually during March, the first Brown Bears also wake up from hibernation, but it’s not yet a good time to spot them. March is also a relatively good time to spot Elk and Mountain Hare.

The first real sping months, when it’s more or less certain, that spring is close. Teh Steller’s Eider leave their wintering grounds ususally around the 10th of April, although some can still be spotted migrating later. The second part of April is also probably the best time to spot Western Capercaillie, also the Black Grouse leks are at their peak. April is also a great time for spotting owls. Tengmalm’s Owls becoem more vocal also during April. And espescially the second part of April is a great time for waterfowl migration. Lesser and Greater-Spotted Eagles return in April. Another soght after migrant who returns in April is he Citrine Wagtail (mostly in the second half of the month).

May is considered to be the best month to see everything and to spot as many species as possible. This is true espescially for the second week of May, when most artic breeders can still be spotted here and a larger portion of the local breeders have arrived. At the beginning of the month, warblers, suchs as Common Blackcap, Whitethroat, and others arrive. The first part of the month is also still good for galliformes and owls. The secod part of the month, you might have to work more than previously to get them in sight.

In May, we also open our Brown Bear Watching Hides, as the chances of seeing bars is much higher than in April. During the second part of the May, the mating season for bears starts and then you can experience some really spectacular moments from the hide. May is also a good month for trying to spot the Siberian Flying Squirrel. The more foliage there is, the harder it is to spot Elk and mammals.

The end of May is when also the late arrivals have gotten here, such as the Red-Breasted Flycatcher, Blyth’s Reed Warbler, Barred Warbler, Icaterine Warbler, Greenish Warbler, River Warbler and Booted Warbler.

Another elusive bird who start lekking in May is the Great Snipe. Nightjars are usually spotted and heard from mid-May onwards. Although June is probably better for them. Common Rosefinch is als a bird that appears in May and can be seenand heard everywhere.

June is the best time to spot all the warblers mentioned in the previous chapter. So even when the end of May is cold, the birds will start singing in June.

These two summer months are usually the quietest months, although might be a relatively good time for spotting breeding birds of prey and migrating waders from mid-August onwards. Also Scoters get on the move and Cranes start gthering into big groups.

These two months are also good for visiting the Brown Bear hide as there is lots of daylight nd bears relatively active. Espescially during the first part of Juy and second part of August.

On some years, we have a good influx of Red-Foted Falcons. During some years, they peak at theend of August, on some years in the first half of September.

Sptember is a relatively good time for spoting Ural and Pygmy Owls. Although they are not calling as actively as in spring, as the breeding season is still many months away. Espescially Pygmy Owls can be tricky at times. Sometimes you hear and see them during daytime sitting at the top of the tree, and sometimes in the evening they call a few times, but do not want to how themselves at all. The time is good also for spotting woodpeckers, and quite good for finding Black Grouse, Capercaillie and Hazel Grouse.

September is also the best time to hear wolves howl. Bears are actively looking for food to fatten up before hibernation and the chances to se them are very good. The chances of spotting a lynx have become higher again from the second part of September onwards. Elk rutting season kicks off in September and the best days are usually when the first cold mornings have gone by.

The begnning of October is a great time for spotting owls, galiformes, and woodpeckers. Excellent time for migration of both waterfowl and passerines. The range of species that can still be seen, is not wide, but there defeinetely can be some excellent surprises. Such as Bohemian Waxwings or the first Northern Hawk Owls or Rough-Legged Bussards.

Shorter daylight hours and decidious trees becoming bare before hiberntion, means that it’s a good time for finding lynx. Also a good time to hear wolves (although there’s more wind in Octobr), and to spot bears. We usually close the bear hides ater the second October week, because the dayliht hours have just become so short and when the temperature get lower, the bears also become less active and rather stay around their hibernation area.

Not the best birding months. Can have some nice surprises, such as owls (Northern Hawk Owls and local breeders), snow buntings, redpoll and it’s an okay time to look or woodeckers on windstill days.

When the waters start to freeze in December, it becomes a decent time to spot Fish Otter around the coast or river patches which are still ice-free. When there’s snow, it’s a great time for tracking various animals, but it’s rather dificult to predict if there’s going to be stable snow in December. Last years have shwn, that the snow situation gets better in January.

There are defienetely a lot of things we forgot to mention in this post, but hopefully it will helpyou to get a general understanging what times of the year ar good for what species. If you plan on coming and nee d help on planning the tour, let us know on info@natourest.ee.