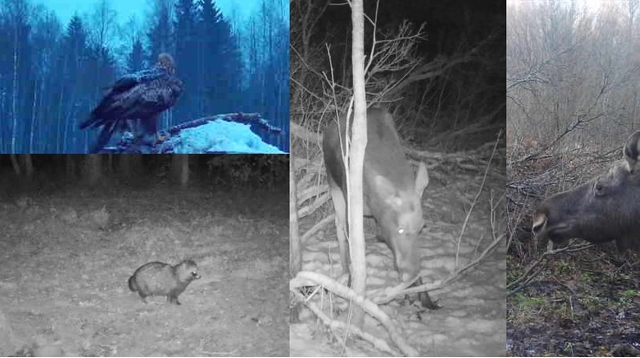 December means that all the bears, who gave us unforgettable emotions from early spring to late autumn, have become dormant. The last active Brown Bear was captured by our camera trap on the 29th of October. This does not mean that life around the new bear hide has gone quiet. As the new hide is not even a year old, we haven’t had the possibility to observe what kind of visitors we have there during winter. So at the end of autumn, we set up several camera traps near the hide and crossed our fingers. To our surprise, Alutaguse forest area had a lot to offer also in winter.

On one December morning, one of the cameras captured an adult Golden Eagle – one of the most majestic birds of Estonia. It is known that adult golden eagles almost never leave their territory, so it most probably means that our new bear hide is in their territory and it’s only a matter of time when we’ll see them again. The other notable, but rather daily feathered guests have been Grey-headed Woodpeckers – both male and female. Besides them, the more daily guests are Great Tits, Blue Tits, Marsh Tits, Willow Tits, Nuthatches, Jays and occasionally Ravens. Sooner or later, White-backed Woodpeckers will also have to appear in front of the camera, because they have been seen several times searching for food not far from the bear hide.

The biggest visitors we have had are Elk and at times, there are more than one in the same picture. There are sufficient willows and aspen trees nearby, so hopefully, they will stay around also for the rest of the winter. The hairiest guest we have had are Raccoon Dogs – still foraging food and, almost like “short-legged thermometers“, illustrating that the winter hasn’t shown it’s colder side yet.