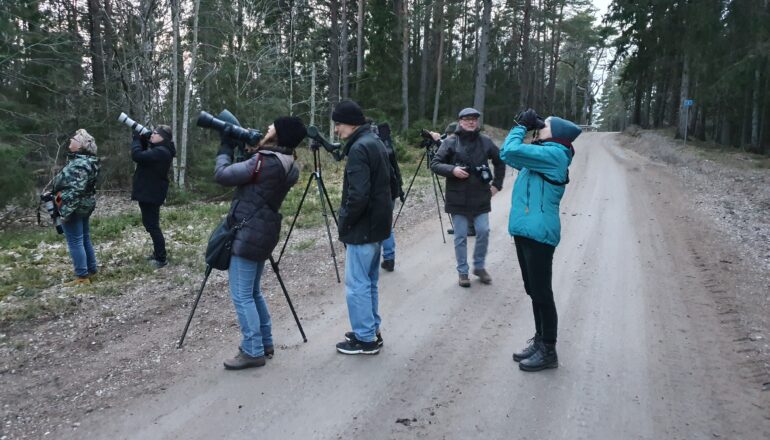 After 2 years of waiting, canceling, and postponing, we were able to make our first spring tours. To be exact, we have already had 2 lynx tours, 2 Steller’s Eider tours (3rd one running at the moment), and one self-guided tour, which ends today and is also concentrating on the Steller’s Eider. The photos are made with a smartphone directly or digiscoped (except the lynx photo).

The season started already on the 28th of February, with looking for mammals and birds in the eastern part of the country and the west coast. The main attraction was the Eurasian Lynx and there was 1 observation of the lynx. Other mammals that were heard and seen, were Elk, wolves (heard), Ringed Seals, Grey Seals, Mountain Hare, Grey Hare, Raccoon Dogs, and Roe Deer.

During our first Steller’s Eider tour, at the beginning of March, we had 2 successful Steller’s Eider observations (one in the evening and one in the morning). We got a group of about 60 birds, more or less at the same location for 2 days. On the second day, the group was split up and mixed with a flock of Long-tailed Ducks. We also managed to have 3 separate Ural Owl observations, every time we were the ones who left the spot first because we had observed the magnificent owls for a long time without disturbing them.

Then we had a private tour, which concentrated on the Eurasian Lynx again. During 4 evenings spent looking for the lynx, we had success on 3 evenings with 4 observations. That’s a great score. And 3 of those observations were quite long. First of the observations included 2 lynxes, whom we were able to observe for about 15 minutes ( I think?). Here’s a photo of those 2:

The third one we managed to see that evening, was about 1-2km from our accommodation, just wandering on the asphalt road. We managed to get really close to it, but the observation was rather short. It was probably one of the lynxes who left its tracks and markings around our accommodation. The owner had heard him/her the morning before our arrival (around 5 AM). The other 2 observations on the following evenings, were around sunset. The lynx had caught prey and was trying to hide the rest of the prey on the first occasion and then taking it out again during the final observation. With so many observations, there was also enough time to look for Ural Owl and Pygmy Owl and to go cross-country-skiing and walking.

Most recently, we had our own Steller’s Eider weekend tour, where we managed to spot or hear 84 different species (than you Serge for the very precise counting). The tour started with a very successful Three-Toed WP observation on a really slippery walking trail…and then after picking up the last arrivals from the airport, we had another successful Three-toed WP observation in another location for the ones who hadn’t seen it yet. It did not go so well with the Steller’s this time, as we just saw about 6 individuals in flight, disappearing after landing, and then another 2 (both drake and a female duck near a port). Although not a big group of Steller’s Eider, they were from a good distance. Plus, there was a 1st year Black Guillemot at the same location! Time was running and we hoped to go for the Pygmy and Ural owl the same evening, so we skipped a few more possible locations for the Steller’s Eider and drove to the port. No luck with the owls on that evening, but then again we had an excellent owling experience during our last evening with a male hooting at a close distance for a long period, so everyone had the chance to observe and photograph them. No White-backed WP this time, tho. The closest we got, was a freshly made tree cavity in a park on the last day. Close, but not close enough..

Just today, a self-guided Steller’s Eider tour ended. So far I know that they got a group of 77 Steller’s Eider, 3 Pygmy Owls in the evening on Saaremaa, and White-backed-, Black, and Grey-headed Woodpecker, on one day. Rather strong winds on all of the days, so very successful. The info about the last evening and morning, I will receive in the following days.

And now there’s one more Steller’s EIder tour going on. Also, this group is enjoying the rather windy weather…but already have seen a group of Steller’s Eider and Pygmy Owl as the biggest highlights. Today they will move from the island to the mainland and hopefully, more success will follow.

UPDATE 1.04 – The Steller’s Eider tour ended yesterday and on the mainland, they pretty much had all the missing species – Western Capercaillie, Ural Owl, Three-toed Woodpecker (on the last day on the way to the airport), lekking Black Grouse, White-backed Woodpecker, and Hazel Grouse (unfortunately only half of the group).

Tomorrow will start the last Steller’s Eider tour of the spring.