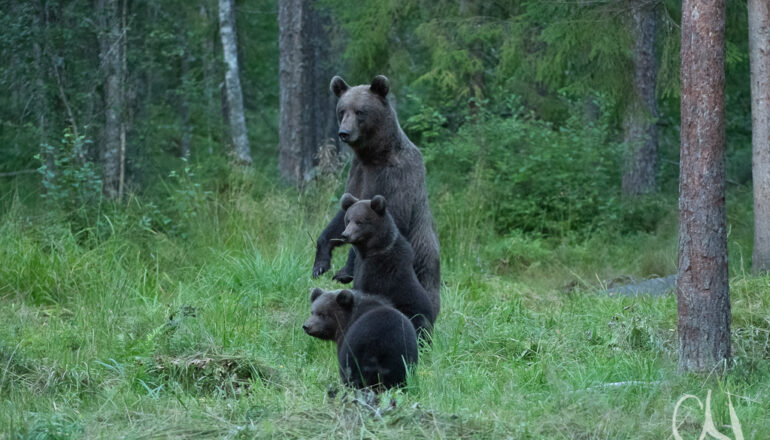 In August 2021, the team of the Estonian TV series “Metslased” (meaning “Savages”) visited our Brown Bear Hide. Our team member Peep was there to give them an overview of what Natourest is doing in Alutaguse and stayed with them in the hide for the night.

It was a really exciting evening with magnificent observations!

The “Savages are actually hiking through Estonia. From the west coast to the east and filming all the cool experiences while they are on the road. So when I met them near Seljamäe hiking trail, the feeling was good, as the whole crew seemed to be relaxed and down to earth. My colleague Ahto, helped me to become even more optimistic after he told me that with such weather the animals should be active and they can appear earlier than usual. Thus we should get to and inside the hides as soon as possible. So we did! However, I would have never expected such an awesome evening.

Less than an hour after we had shut the hide door behind us, things started to happen. There was some movement on the forest side, but whatever it was, it did not show itself fully. And then, some minutes later, a female bear with 3 cubs appeared on the creek side of the hide. They did not stay for long, tho, and soon the whole family, under the leadership of the mother, ran through the creek and disappeared in the bushes. The female came back several times that evening, but she left the cubs somewhere safe behind and reappeared always alone. The reason why the female with the cubs ran away, was that a younger male appeared on the forest side of the hide just seconds after they were out of our sight. The male was about the same size as the female, but it’s always easier the keep things safe.

Here our observations did not stop yet. As told, the bears reappeared several times and we also saw Wild Bore, Raccoon Dogs, and the evening ended with a young Elk bull chewing on willow twigs and then moving to the salt lick behind the creek.

PS. The female with cubs visited our hide on several more occasions in August and September.

Although all the talking is done in Estonian, a video can tell more than 1000 words. The scene with the “savages” coming to the hide is in episode 9 and begins from the 6th minute onwards.

Elizabeth Reed visited our Brown Bear hide already in 2019 and wrote about her experience in a Passion Passport article in 2021 – https://passionpassport.com/estonia-brown-bears/ Now she went on the Amateur Traveler’s podcast and gave another great overview of her Brown Bear Hide visit + other tips about places to visit in Estonia. For us (and hopefully for others too), it’s always very interesting to hear and read what people from other parts of the world think and feel about the whole experience.