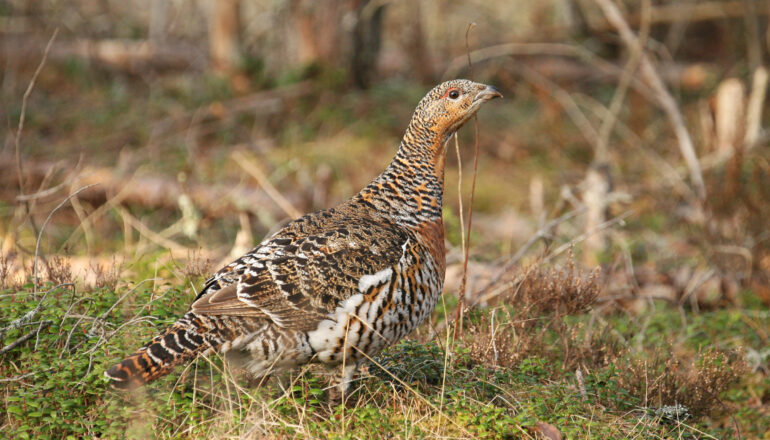 The year of the Western Capercaillie is ending in about a week. Now it’s a good time to look back at some of the encounters we had with this forest grouse. The first encounter was in March during our Steller’s Eider Weekend tour, where Rein and his group met a “crazy specimen” (photo below) on a forest road in NW Estonia. For me, one of the most memorable encounters took place during a September tour with Birdingtours.

We headed for the Brown Bear hide already on the second evening. That evening we had great observations from the hide, including several Brown Bears. There is photo proof from one of the bears who arrived when the light conditions were still good. Two of them came after the sun had already set, but it was still possible to see them roaming around the hide. The writer here believes that they could have been siblings (2-3 years old), as they appeared and disappeared together, were about the same size and seemed to get along just fine.

The next morning, on our way back from the Brown Bear hide to the cars, we saw a small group of Black Grouse flying away. In addition, the whistling call of Hazel Grouse was heard several times during our walk back to the cars, but the well-concealed bird did not show itself. Still hoping to see something before driving to the hotel for breakfast, we turned to a smaller gravel road, where we had seen Black Grouse before. Surprisingly, the first grouse we managed to see was not a Black Grouse, but a Western Capercaillie (video by Daniel & Julia).

The impressive bird was alternately pecking seeds from a hawkweed plant (possible?)  and small stones from the road. We had a long observation and could get quite close to him even after changing the order of the cars so everyone could get a good view. The cock did not want to fly away but started to walk along road tracks and it seemed, that we won’t make it back in time for breakfast. Then, at one point, it was enough walking for him and he flew past the cars back in the direction where we had seen him for the first place. I guess he wanted to continue his breakfast. It’s not every day you get to see the largest member of the grouse family for so long. Interestingly, also our other groups saw a Capercaillie in the same spot during our autumn tours. Another unforgettable encounter with the Western Capercaillie was this one from spring 2017.

But the amazing morning continued. We also saw what we were hoping to see in the first place – Black Grouse. After driving a few hundred meters, we saw a small group of the grouse sitting on a birch tree. The sighting was not as long and clear as the Capercaillie sighting, but nonetheless, we were really happy to have seen 2 grouse species inside 300-400 meters.

And we even made it on time for the breakfast!