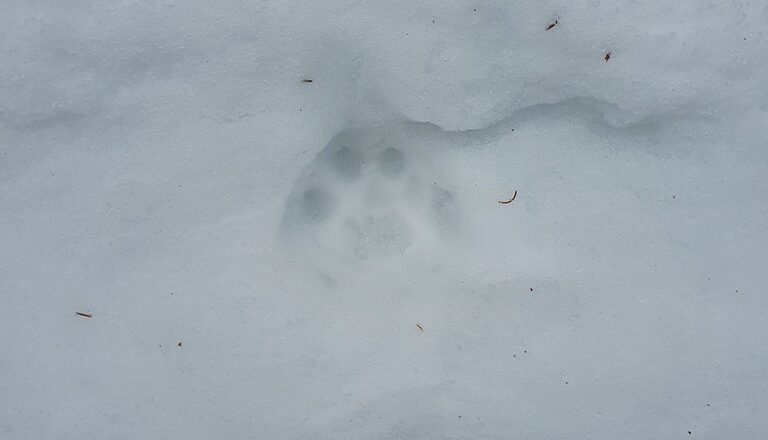 During the last week of February, we cooperated with Hunt – Eesti rahvusloom (Wolf – Estonia’s national mammal) and made 2 very spirited wolf-themed tours. In most parts of Estonia, there wasn’t much snow left, so the only reasonable option was to make the tour in the Alutaguse region. After a long, tiresome, and unsuccessful search for wolf tracks, they revealed themselves through the most wolfish way possible – by howling under the full moon and the howling came from the direction of our Brown Bear hides. On the next day, we went there to take a closer look and to our surprise, the wolf tracks took us directly to our Brown Bear hides.

Finally, the tracks were so close to the Brown bear hide that I managed to make a photo where it’s possible to see both – wolf tracks and the Brown Bear hides (upper part of the photo).

Besides wolf tracks, we also found really many sign of Elk activity on our patch and near the hides. The whole area is a good Elk habitat. Maybe it’s because we do not do any forest management or allow hunting on our land. Anyway, the patch has lots of dense forest stands, birches, and willows and seems to attract lots of them. It was clear that the wolves took interest in all that Elk activity and for us, there were a lot of signs and tracks to discover and interpret.

Surprisingly, there were a lot of Lynx tracks around the forests of Sirtsi bog. To be exact, on the first day these were the most common tracks we found. The weather was was warm and the snow melted quickly, so some of these feline tracks transformed into tiger tracks, as seen on the photo below.

I was happy to see that also a Pygmy Owl was present near the hide. This little fellow has been often heard from the hide also during previous seasons and it seems it will be the case also this year

We’ve heard the howling of a wolf pack from the Brown Bear hide also on previous years, but there have not been any visual sightings from the hide. But the amount of activity in the close distance of the hides gives us hope that this year someone will be lucky. If you stay in the Brown Bear hide, keep an even closer eye on the meadow side of the hide.

You can find additional info about our Brown Bear watching hides from here.